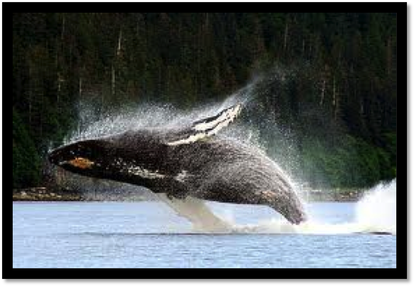 ·      Adults range in length from 39-52 feet and weigh about 79,000 pounds. Males are generally smaller than females.
·      The humpback whale is one of the largest of the baleen whales and the only one that vocalizes.
·      Humpbacks are powerful swimmers and use their massive tail fin, called a fluke, to propel themselves through the water, and sometimes into the air—landing        with a tremendous splash. Scientists aren't sure if breaching serves a purpose, such as cleaning pests from the whale's skin or attracting a mate, or whether              whales simply do it for fun.
·      The humpback is distinguished from other whales by its very long flippers (as much as a third of the whale’s length) with large knobs on the leading edge.
·      Humpback feed mostly on tiny shrimp called krill and various small schooling fishes. A humpback can eat up to 1.5 tons of food per day using the baleen in its          mouth as a sieve.
·      Baleen is the fringed plates, which hang down from either side of the upper jaw. Humpbacks have 270 to 400 baleen plates, each about 30-inches long. As they        feed, the pleated grooves in their throat expand to allow them to take in large volumes of water and food. As the mouth closes, water is forced through the              baleen plates trapping food.
·      June and July are the best months to see them feed by bubble-netting where a group of whales will blow a net of bubbles to surround and confuse their prey            then swim through the center, jaws wide, to scoop up the food.
·      On average, adults take a breath every 10-15 minutes, but can remain under water for as long as 45 minutes. Young whales, called calves, must rise to the                  surface every 3-5 minutes. A puff of white vapor is formed when exhaled air expands and condenses.
·      When staying close to the surface, their tail typically stays close to the surface when they dive and the bottom side of the tail or fluke is not visible. When the            fluke is straight up and the bottom clearly visible, the whale is typically going for a deeper, longer dive.
·      The purpose of breaching (when a whale launches itself out of the water) is still unclear. Some suggest it allows the whale to dislodge barnacles and other                  parasites from its body, serves as a form of communication, or maybe is just a form of playful activity.